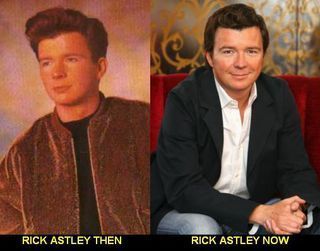 Mercifully, I'm back in 2009 and already delighted that 2008 has gasped its last, which was easily the worst out of any year I've had on this planet. Yes, that even includes 1987, when I had the ubiquitous unrecquited teenage crush; my 14th birthday fell on Black Monday; acid house/Rick Astley were in full dissonant diarrhea mode; and watching Doctor Who equalled an evening around the TARDIS console with Bonnie Langford (by the way, has any sad Whovian noticed that her penultimate episode is episode 666 on IMDB? Just me then). Oh, and just to prove the 1987 parallel, 2008 had full-blown rickrolling as the tortuous deja vu soundtrack to the crisis of faith in my last career; a career that I've thankfully ditched (more of that in another blog entry, however).

2009 has started with a brand new job, a brand new location and, yes, another New Year Resolution of a weekly update to this blog. Admittedly almost broken, but I can blame the lack of a proper internet connection and trying to get a permanant roof over my head since the beginning of November. But I'm back with a vengeance. For future posts, I'm looking to witter about Twitter (annoyingly, the mainstream Press appeared to have finally caught up with the Twitter phenomenon, just as I was writing the article); ask Carol Thatcher why I can't dance if I'm half-black (no, really); and mention the time during The Wilderness Years when I attended an alien-worshipping cult (with photos included).