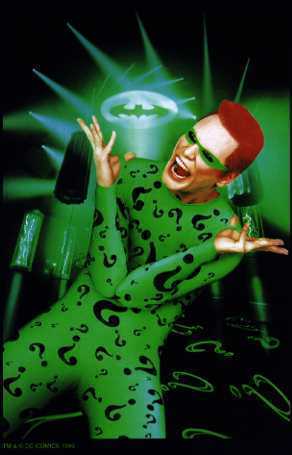 Do you remember that scene in "Batman Forever" when Jim Carrey's "The Riddler" plugged most of Gotham City into his head? Big swirly green brainwaves were sucked from the populous sitting befuddled in front of their TV screens and sucked straight into The Riddler's big swollen conk. Well, that's sometimes how I feel Twitter operates. It's sometimes too much, because my brain constantly expands uncomfortably at the swelter of mental projections swirling in the virtual vacuum. Having said that, it can sometimes feel like a fantastic angel-decorated Wim Wenders movie, where you can drift in between a constantly scrolling narrative of peoples' thoughts. It can occasionally resemble the shock horror realisation of the Buffy episode "Earshot", where the drifting between thoughts can reveal an innermost turmoil and shock decision. Or, on a really bad night, Twitter can reveal a bunch of trolls all running out from underneath their bridge and shouting spite.

But overall, it's more like the Wim Wenders "Wings Of Desire" movie. Big brilliant brave thoughts, all jostling with each other, formed from the collective niceness of the whole network, born out of new human-made Twitter customs like Follow Friday and Music Monday. You either share friends thoughts ("Hey, check this guy out, he's funny! Check this girl out, she's building a hovercraft on solar power and blogging about it") or share music ("Hey, just found this harpsichord cover from a 90s band of a 70s classic on Spotify!"). You can saunter between all these peoples' undiscovered blogs and scrappy thoughts, but not feel like an unpleasant voyeur, because they're all wanting to share stuff too.

How come I wasn't born into all this? Six degrees of separation was five too many for me. I lived in a location where 50 miles due East seemed too far, an exhausting struggle to get to meet a few friends for a snatched couple of hours or a strained phone call where only one person was listening (albeit, a great friend on the other end of the wire). But brilliantly, there's a generation just behind me who are growing up with all this. I feel privileged that I'm involved in the Glow project, an intranet that extends all over Scotland's schools and shares knowledge between kids and teachers, which removes those six degrees. It means that children in urban Glasgow and Dundee can share knowledge about the Highland Clearances with... hey, get this... youngsters that grew up in the Highlands. Plus, not to get too parochial about this, it means those kids can talk to other children on other Continents. What's next? Could the Glow intranet start talking to people up in Space, like Soichi Noguchi, and let the children have a literally out-of-this-world experience? No wonder George Lucas has given his seal of approval to Glow on an occasion. I'm even playing with developing a Twitter for schoolchildren that will enable kids to talk, uninterrupted by those pesky adults, to that aforementioned spaceman.

However, a couple of caveats are in order.

Firstly, I sometimes feel like The Riddler, with the big bloated head. I can't keep up with everyone sometimes. I'm busy, developing Glow's search engine, while moonlighting on extremely silly web projects with comedy writers. Or I spend time worrying, just after 5pm, about stupid things like mortgages or the airbrushed forehead of David Cameron. Let's just leave the currently rapid expanding virtual world, free of geographical boundaries, to the kids with their developing dendrites and naughty neurons.

Secondly, this isn't the sort of state education intranet that needs to have money cut by torrid Tories or limping Labourites. In this new world, elitists need not apply and they should allow education (oh, and meaningless babble and gossip) to course through the new digital veins of the world.

For those reasons alone, don't let the digital world grind to a halt. Vested interests in the UK analogue world would be quite happy to let it happen. They've all got bloated heads full of undersigned lobbyist interests, advertising deals and poorly written Digital Economy Bills (DEB) of a world they no longer understand. Younger generations are now already born into this and ready to learn as much as possible. Is it jealousy of those generations that governments and older generations wish to quash, I wonder?

That's the true riddle, isn't it?

And to think. You regular readers thought I could only write cynical posts. Shame on you.